The Heart-Warming Sight of Goldfinches.

Pulling back the curtains to the heart-warming sight of goldfinches ….

This morning I sleepily pulled back the curtains to look out on the rain drenched scene below. Movement and a flash of colour caught my eye and I stopped to look more closely. And there, on our not so tidy bank, was a Goldfinch sitting on a soaked thistle. A bolt of joy woke me up as seeing these beauties in the wild never ceases to make me happy, there is just something about that little red face. It was picking the seeds from the thistle and flicking the unwanted chaffs to the grass below. Then I spotted a second one slightly down the bank investigating something hidden from my sight. It is always lovely to see one and even better to see a pair. 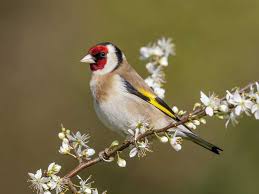 Goldfinches have a special place in my heart, and they remind me of people and times long gone. In truth, bittersweet memories, always followed by the pure gladness that they choose to share their presence with us around our home in the Monaghan countryside.

When I was a little girl my father, a cobbler, kept two Goldfinches in blue cages in the window of his workshop up Mooney’s yard in Castleblayney. I find it quite difficult to even write those words, but these were different, maybe less enlightened times. One thing is for sure though, and that is my father and men of his generation loved the Goldfinch birdsong. And it was the ‘done thing’ to capture and cage them. They were well looked after and cleaned out regularly. These beauties loved the slices of juicy apple that Daddy would cut with his cobbler’s knife, and stick between the bars of the cage. Bunches of groundsel was a popular feast too. Regularly I was sent to buy hemp seed in Corrigan’s hardware shop across the road. Little did I know that I was buying enough hemp to fill acres of hot houses with lush green cannabis plants. But I had never even heard of that commodity!  On the evening of 7th March 1976, a bomb went off on the main street, a short distance from Daddy’s workshop.  One of his Goldfinches died from the shock that night. The other one lived for a long time, into the 1980’s. His name was Dick and he continued to provide the musical soundtrack for the working day as my father mended shoes up Mooney’s yard.

There was another Goldfinch in my life during those years and he too was named Dick – I really do not know what that was about. This was Connor’s Dick. ‘Connor’ was really Mrs O’Connor whose name was shortened by my sisters who were besotted with her.  She was our next-door neighbour in Lake View until 1973 when she moved to live with her son.  We inherited her lovely Goldfinch, Dick who moved into our scullery. His cage hung above the big wooden wireless with the black plug. This Goldfinch was a real character and he was part of our home for a long time. He would drown the place with splashes as he bathed in his fresh water and he too loved his apples and dandelions. He was fond of music from the wireless and his absolute favourite was Brendan Boyer’s ‘Huckle Buck’. To say that he would go ‘buck mad’ when it was played is an understatement. And I would often play The Royal Showband LP just for the thrill of Dick’s exuberant performance. They say the average lifespan of the Goldfinch is 3 to 6 years in the wild with the record being 11 years. If memory serves me, I believe ‘Connor’s Dick’ lived with us to the ripe old age of 13 after which he left a gaping hole in our home. I am always reminded of him when I hear the ‘Huckle Buck’.

The story picks up again in 1988 when I met Pat, my now husband and I started visiting his parent’s house regularly. Pat’s father kept his bird cages out in the shed. He kept Canaries and Goldfinches. He cross bred them to produce ‘Mules’, great singing birds he said.  Over the years the shed became an aviary that extended the length of the garden. By this time, I was uncomfortable with the notion of keeping birds in captivity. During our time in Australia Pat & I were lucky enough to experience huge flocks of gem green budgies flying wild in the outback.  After that I could not comprehend keeping them caged.

And back in Ireland this feeling about caged birds transferred specifically to Goldfinches.  Why cage them? Surely, they would be happier in the wild?  We noticed them around where we live. Pat has a keen ear for them and can quickly spot them. Afterall he grew up listening the them. I felt so honoured that they came to us. They sang loudly and let us see them up close as they fed and courted and sparred with each other.

Time passed, my father-in-law aged and scaled back his aviary, but he continued to keep a few goldfinches. He asked that Pat would set them free when his time came to leave this world and his wishes were carried out. A strange thing happened as we walked through the town to the church with the funeral cortege. Pat said to me “listen… Goldfinches”. We looked up and on the electric wires sat a few goldfinches, singing away to their heart’s content. It was like a guard of honour, an acknowledgement that he had looked after them.  We often speak about that encounter.

Where we are now….

So, we have come full circle with the Goldfinches. Our fathers captured and caged them because they loved their song.  We live in a home surrounded by wilderness, by choice. I had a fight with the rotating blade of a lawn mower when I was three and have never felt the urge to own one!  So, we can be in our home, winter or summer, and be up-close with these gorgeous wild birds when they choose to grace us with their presence. Once I counted seventeen Goldfinches picking in the yard, but I am equally thrilled to see one or two, as I did this morning when I pulled back the curtains.  They are comfortable around us and that makes me exceptionally happy. How could I not be inspired to create, by the heart-warming sight of goldfinches?

4 thoughts on “The Heart-Warming Sight of Goldfinches.”

This site uses Akismet to reduce spam. Learn how your comment data is processed.